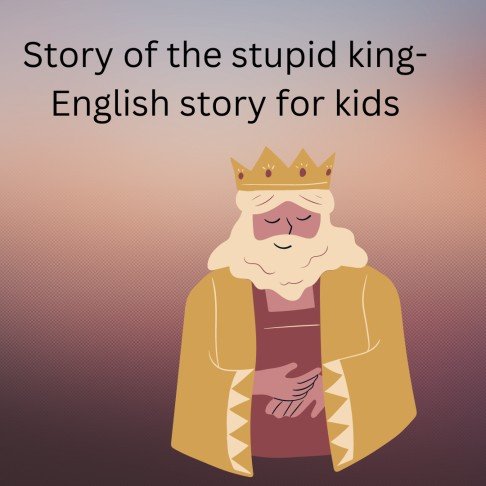 Story of the stupid king- English story for kids | A king was very fond of wearing good and new clothes. He used to spend all the wealth of his kingdom on his clothes and used to wear new clothes every day. He did not care about his people

in front of clothes. One day two chauffeur men came to the king’s court. He said that both of them make very special types of clothes. The clothes made by them are visible only to intelligent people.

Stupid people can’t see the clothes they make. When the king came to know about both of them, the king’s happiness knew no bounds. He thought that now I will wear such a dress which is visible only to intelligent people. That way I will be able to sort out the intelligent and stupid people.

The next day the king called the two men making clothes to his palace and said that make the best clothes for me given etc. Both the men who made clothes went away with the goods. The cloth makers started making beautiful clothes for the king. Like this many days and weeks passed.

Fearing to be called a fool, the king said, Oh wow! What a dress. How beautiful! How good is its color, how well it is painted. The king gave them gold ashrafis and they both left from there. And did not give any clothes to the king.His foolish and intelligent words were false. They did not make any clothes. There was a noise in the whole kingdom that today the king wore such clothes which only intelligent people can see, idiots will not see the king’s clothes.

Story of the stupid king

Oh wow Raja ji!” What beautiful clothes do you have”, said one. The other said, “Look at the design of the clothes”, how good it is. None of them wanted him to be called a fool by saying that he could not see the clothes, because the makers of the clothes had said that only intelligent people could see these clothes.

Then a little girl cried out loud, Oh!!! What clothes are you all praising. Very angry, he sent his soldiers to find both of them. Since then the king took a vow that he would not come in any such thing and would take care of his subjects more than his clothes.(25 Fruit names in Hindi & English )