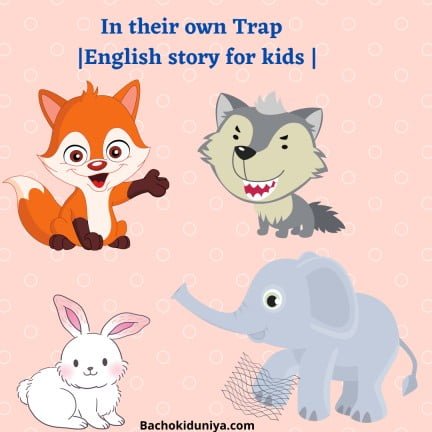 In their own Trap | English story for kids |

The fox and the jackal were two evil friends. They both had enmity with a cunning rabbit. Rabbit was liked by all animals, so they did not like the rabbit. One day they planned to catch the rabbit.

The fox said that the rabbit is very clever, he will not fall into our trap. The jackal said – “I have a very good plan. A few days ago I saw some people catching animals with a net. We will also catch the rabbit with the same net.

The fox asked – do you think this idea will work? The jackal said – this idea will definitely work because once I was caught in the web. The fox asked in surprise, then how did you get out? The jackal said, actually he had come to catch the lion, but by mistake, I got caught in that trap. That’s why he himself threw me out of that trap. I think those people were scared of me. The fox stopped laughing and said yes, maybe it must have happened.

The fox said, let’s work on your plan, but from where will we get the net? The jackal said you come with me. I know where to find the trap. The jackal took the fox out of the forest where there was a fisherman’s house. There was no one at the fisherman’s house, so they both stole the net and ran away.

The fox said that this net is small but it is right to catch the rabbit. The jackal said the rabbit goes to the elephant’s house every day at this time. He must be coming, so before he comes, we should lay this trap. Both of them laid a net and to hide it, they spread leaves on it.

Then they heard the sound of someone walking. The fox said it must be the sound of a rabbit walking, let’s hide quickly and both of them hide behind the tree.

The elephant cried out angrily – “What did you think you would trap me in this small trap?”

Seeing the anger of the elephant, the fox and the jackal started trembling with fear. Both were about to run away after saving their lives when the elephant caught them with its trunk and tied both of them in the same net.

“Now come out of this trap and show it!” Saying this the elephant left from there.