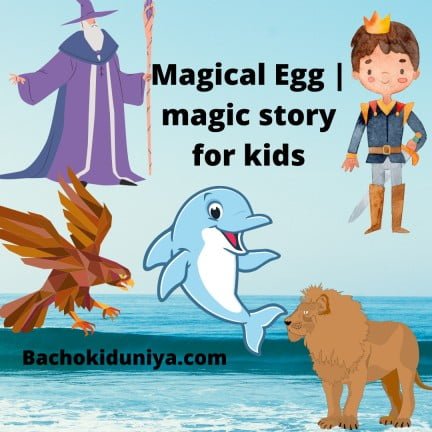 In some town there lived an immortal man named Rofail , he had three daughters and a son. There was a fire in the palace of Rofail , in which he lost all his wealth.

After this, Rofael would go to the forest every day and find wood for cooking. But he had never gone to the forest, because of this he used to forget the way. When he forgot the way for the first time, a lion asked to help him but the lion said in return you have to get me married to your elder daughter. Rofel started thinking that if he does not reach home then his wife and children will starve to death, so he said yes. The lion showed Raphael the way out of the forest and after a few days came to his house and took his daughter to marry him.

Similarly, once again he forgot the way, this time the eagle showed the way to Rofael and in return married his other daughter and took her to his house. Similarly, one day, while coming from the forest, Rofael fell into the water, then the dolphin fish helped him to get out of the water but he also proposed marriage to his third youngest daughter in return. In this way, Rofael took the three daughters of Rafel by marrying a lion, a falcon, and a dolphin fish.

But thinking about all this, Rofael’s wife used to be sad. She wanted to marry her daughters to the prince. His son was small, he did not know anything about it. When he grew up, he came to know why his mother was so sad. The boy rode on a horse and went to look for his sisters. First, he found an elder sister who told him that her husband was not the lion, the falcon, or the fish. is a prince

The Prince and the Sorcerer | Magic Story for kids|

Actually, all those three princes were brothers but a magician has made them lion, falcon, and fish with his magic, brother if you kill that magician then all three of them will become prince again. That magician lives in a cave where if the prince goes, he will be burnt to ashes but you can go to that cave because the younger brother of three sisters can go there but you have to go there carefully.

The elder sister also called her husband Lion there and all three sat down and started planning to kill the magician. The lion said, bring the magician out of the cave, then we will see him. Then the boy walked towards the cave to kill the magician. He went to the magician’s cave and said that you are a very useless magician, your magic has not worked on the princes, they are roaming outside comfortably as a prince. If you don’t believe me, come with me.

The magician came out of the cave.

He grabbed that egg and hit it hard on the ground, which broke the magician’s magic. Now the three princes who had become a lion, falcon, and fish had come back in their form. All three became princes again and their palace also came back. Everyone was very happy seeing this. Everyone celebrated together and thanked the girl’s brother, now everyone started living together with love.