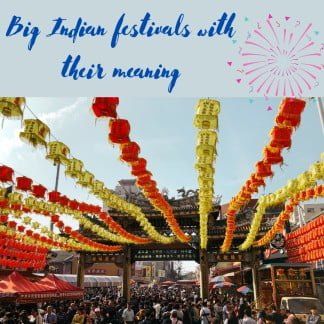 Time difference between India & other countries

In India, there are 4 big festivals Holi , Deepawali, Eid, Christmas. they are big festivals apart from this there are so many festival which we celebrate. Those Religious Festivals and their reason to Celebr

Diwali : Diwali is known as festival of light.on this festival people exchange gifts and sweets. According to Hindu Religion GOD Ram came to Ayodhya After 15 years of Vanvas. (exile )

Holi : Holi , is a religious spring Festival Celebrated by Hindus. it is the Festival of Colours. on this festival people play with colours.

Dusshera: Victory of good over evil.

Eid-ul-Fitr : This festival is celebrated by the people of Muslim Community. it is celebrated after a 30 days of fasting during the holy month of Ramzan.

Guru purab : Gurupurab is Celebrated by the members of the Sikh. ( Sikh a religion like Hindu , Muslims ) It is celebrated on the birth Anniversary of their first Guru Guru Nanak Dev ji.

Pongal : Lohri or Pongal are the same festival . Farmers make this festival in the joy of having a good Crop.

Onam: This festival is Celebrated in Kerala state. The reason to celebrate this festival is to welcome the King Mahabali. people made rangoli on their Countryard.

1 thought on “Big Indian festivals with their meaning”