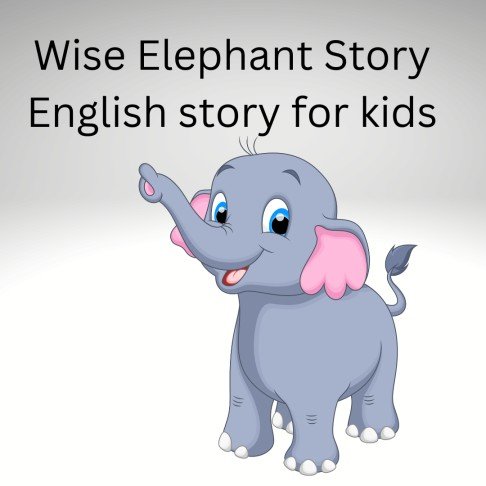 Wise Elephant Story. An elephant lived with his family in a forest. One day the elephant was going from one forest to another with its entire family. On the way, the elephant saw a shining thing. The thought came into the mind of the elephant what is this thing that is shining so much?

Because of this blood started flowing from the feet of the elephant. The entire family of the elephant had gone a long way. Now the elephant could not even ask anyone for help. In no time it got dark. The poor elephant sat there all night and groaned in pain. By the time the elephant’s family found out that the little elephant had separated from them, it was too late.

It was dark enough so he could not find his little elephant. The next morning an old couple passed by that road and they saw an elephant baby lying down with blood coming out of its leg. He saw that the leg of the little elephant was swollen and a thick nail was pricked in the foot of the elephant.

The old man quickly pulled out the nail and as soon as the nail came out of the elephant’s leg, blood started flowing. With this, the elephant’s pain subsided a bit and she started regaining consciousness. Seeing the old couple, the elephant got a little scared but he could not do anything. Because his leg was hurting and he had understood that only this old couple could help him.

To stop the bleeding from the elephant’s feet, the old woman washed the wound with water and tied it with a clean cloth. The old couple got scared seeing a herd of elephants coming toward them. He understood that this is the elephant’s family, so he left the little elephant there and went toward his house.

As time passed the old couple had forgotten this incident. The zamindar of the village where this old couple lived was very evil. This zamindar used to collect tax from the whole village. For any family that could not pay taxes, the landlord forcibly took their food grains with them.
The old couple was now getting sick. Because of this, he could not pay his share of tax. So the zamindar took their food grains with him. One day when the old couple woke up in the morning, a grain sack was kept in front of their house.

The old couple did not understand where this grain sack must have come from. Since the couple was short of food to eat, they kept that sack with them. Now there was a noise in the village that the grain was coming from the landlord’s house. Somebody has taken a sack.

To know this, he now decided to stay awake all night and keep watch. As night fell, they saw an elephant carrying sugarcane in its trunk and placing it at their door. The elephant also saw the old couple and sat in front of them; the old couple got scared seeing that elephant.

Seeing the couple scared, the elephant extended its leg, which had a big wound on it, seeing this wound, the old couple remembered the incident when they had pulled a nail from the foot of a small elephant. The old couple understood that it was the same little elephant who had grown up and was helping them because they had helped him.

Due to this the hands and feet of the landlord and his men were broken. The zamindar somehow ran away after saving his life. Now everyone in the village came to know that the elephant helps the old couple and now the zamindar stopped troubling the people of the village. ( 25 Fruits name )