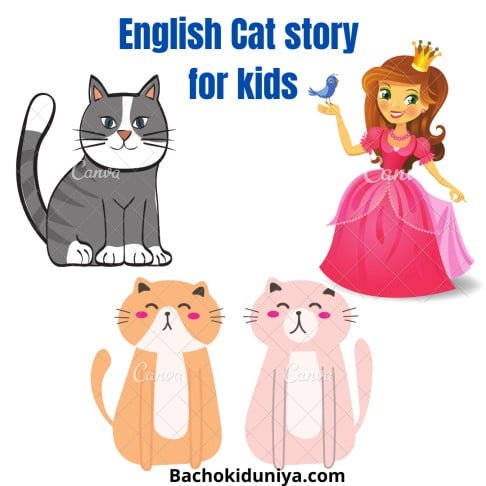 Goma was a very smart and cunning badge. He was very beautiful He had a friend named Yomi the cat. Both were very good friends. One day he went for a walk in a park. That park belonged to the princess. Both of them were roaming there for fun when a big dog came there. Yomi got scared seeing the dog and ran and climbed the tree.

But Goma bravely stood there. He tried to drive the dog away but the dog bit Goma. To save his friend Goma, Yomi started shouting loudly Miau Miau. Hearing his voice, a soldier came running from the palace and drove the dog away.

The princess was very happy to see the snake dead. He thanked Goma. Now she started liking Goma more. Goma becomes the princess’s cutest pet. Now Goma started getting better care in the palace. But in spite of all this, Goma used to remain sad, he used to miss his friend Yomi.

One day Goma was sitting in the garden. Then his eyes went to a faraway garden where a big wild cat was troubling a small innocent cat. Goma immediately reached there to help the little cat. With the help of soldiers, he drove the wild cat away. The little cat was scared and hid in the bushes. When she came out, Goma’s eyes fell on her. That cat was none other than Yomi. Both were very happy to meet each other.

Goma took Tinu to the palace with him to meet the princess. Seeing the happiness of Goma, the princess understood that she is a good friend of Goma. He also kept Yami in the palace. All three started living together happily.